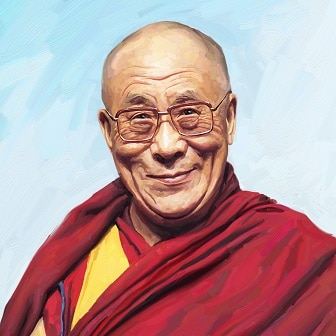 The 14th Dalai Lama has collected many names as the believed reincarnation of Buddhist Tibet’s spiritual and political leader. His humble farming family named him Lhamo Thondup at birth. He became officially known as His Holiness the Dalai Lama XIV at the age of 4.

Fleeing as a refugee to India at an early age helped shape him into the “Ocean of Wisdom” that he is today. That meaning translates from the name Tenzin Gyatso, the part of his extended religious name by which he is often called. The Dalai Lama’s wisdom shows in the many books that he has written.

Happiness and ethics are recurrent themes in these works, including in his best-selling collaboration with Dr. Howard C. Cutler, “The Art of Happiness.” The Dalai Lama is getting on in years and has expressed uncertainty about whether he will reincarnate once more. He has stated that his spirit may not need to go on forever.

The Art of Happiness

“Be kind whenever possible. It is always possible.”